I'll skip the detailed description of the drive From Bend to Montana.  Suffice to say it was a long trip with an overnight stay in Spokane.  Part of the job.  But Spokane gets a little more press on day nine.  Missoula is our official start, but I'm calling it day two.

We rode up a couple of canyons north of town and visited the Draught Works.  We also checked out Charlie B's, a classic cowboy place that attracted LITERALLY all kinds of people.  OK, actually, it attracted literally several kinds.  Cowboys, College kids, fishermen, and etc.  I got to bed pretty early, as the trip is long and the road is winding.

Day 3  Missoula to Darby.
The camping was functional, as we stayed in the local school house yard.   I Did a short ride out of Darby, our first stop.  I checked out some high mountain roads before getting into bear-like country (which  can be said about most places in Montana) and a rough jeep trail.  Returning to smoother roads, I scouted south of town and shot this picture of Trapper peak.  Glacially shaped, and over 10,000 feet tall, Trapper is apparently considered a 'walk up' with occasional use of hands, but safe. (Class 2 if you're a climber). 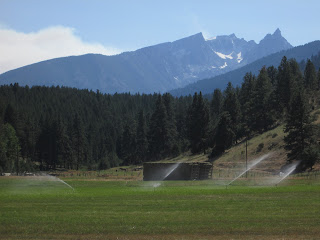 Day 4 took us from Darby to Jackson.
We camped on the Lapham ranch.  Here's a link to a pic of our camping.  The green pastures are misleading.  This is definitely High Country.  Snowmobiles (or 'sleds' if you're a cool kid) are tools not toys here.

I got in a snappy 26 miler that falls under the category of better remembered than repeated.  A 13 mile time trial with Brett M. turned into a 13 mile death grind into a brutal headwind on the return to camp.

Day 5, Tuesday, had us driving to Wise.
As we drove a different route than the riders, I had no idea of how scenic the bike route was.  I caught a 'SAG' wagon up into the hills and rode in 20 miles of gently winding canyon road paralleling a pristine stream.  Apparently the day's riding was "10/10" with a mix of high country, canyon, and varied mountains.  Certainly the part I rode was.

I guess there was a complaint that there was kind of an issue for some riders that the porta potties were too far away from camp.  As the blue box doors slamming are a constant sleep interruption, I'm not hugely sympathetic, but, the riders write checks, meaning the clients are the boss.  But there was a humorous missed opportunity:  When asked by a rider, "Don't you think the port-a-potties are too far away," the reply was an honest, sincere, and appropriate, "It's the best we could do given the site restrictions."

In my upcoming novel, it goes like this:
Client: "Don't you think the port-a-potties are too far away"
Me: "Hmm, Depends." (Ba-da-bing).

Day six, Wednesday,  took the ride from Wise to Phillipsburg, with a day 7 stay in Phillipsburg.
This would be our 'layover' allowing me unfettered opportunity to ride the next day.  It would be an epic.  I won't elaborate, but Phillipsburg, MT,  population approximately 800, has some interesting stuff going on under the surface.  I'm not getting into it in this post, but feel free to comment below or email me if you want more dirt.

There was a dog there, that had a collar with just the town license.  So we took to calling the Lab/Shepard/Collie/and Chow (I mean, always a little Chow, eh?) "Town of Phillipsburg" as a complete name.  I asked people not to feed the obviously well fed animal, to no avail, so I resigned myself to watching good ol' "Town of Phillipsburg" sucker some people out of french onion dip, chicken, etc.  Those tricky fake eye brows!!!! 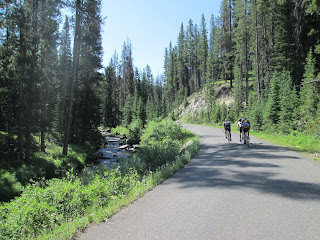 The ride was, I think 68 miles, including 14 on gravel.  3 of us had brought cyclocross bikes in anticipation of adding some gravel roads to spice up the ride.

A highlight of the ride was a lightly traveled mountain road up Skalkaho pass.  I flatted out 7 miles up, and on the THIRD innertube I was rolling.  It was fortuitous that I flatted next to what was described by one member of our crew as "The greatest swimming hole ever."

And truthfully, I was just glad to turn around as there was plenty of riding to be done.

We stocked up on tubes at the wonderfully stocked Bicycle Rides Northwest Rest stop (fruits, sweets, spam) and took an alternate ride on Rock Creek Road.  Where the mapped ride for the riders was an out and back, we jogged left and took the gravel, and crossed the Mountains at a different pass.  (Technically they were just hills.  Interestingly, in Montana, the mountains are MOUNTAINS, but the Rivers are creeks #irrigation).  The ride was steady to fast pace on gravel.  The rewards were riding back on a different road than we came in on, and riding a less traveled road.
But there was a brutal climb ahead.  I did not win the climb.  I'm attributing my loss to failure to hit the albuterol (totally legal in the olympics, fyi) after the dusty road and before the 4 mile grind.  Girth, weight, and lack of fitness can't possibly be the issue.

While in Phillipsburg we saw yet another fire.  I love that smell, it smells like... OH, It smells like the, like, LITERALLY 7th fire in seven days.  (Do you see how I used literally correctly, while incorporating the horrific abuse of the word "like?"  Helicopters  rotating up to fight fires was a common sight.

As I remember  zero rain, lightning, or thunder on the trip, I have to assume the fires were man made.  If that is the case, I don't know whether to hope for gross stupidity from some yahoo flipping a cigarette butt, or parking a hot engine on roadside grass, or arson.  Obviously Arson is worse, as it implies malevolence.  But if it's just idiocy on this scope we're all doomed anyway.  So I'll just pretend that an arsonist roams Montana, in a manner that deserves a book treatment.  Hmm.  My next project: Big Sky Burning: Book one in the Jim Bridger, Montana DCI series: .  Hmm sounds like a lot of work.  Just pay me $1000, and you write it.  That's how Tom Clancy does it these days.  But make sure you include this line in the novel:


Oh, and bringing the story of Phillipsburg full circle, it turns out the Dog was the town dog.  So, "Town of Phillipsburg" it was.  After a night of sleep marred only by some kind of loud domestic dispute from a nearby house (my campsite was far enough that I didn't get bothered), we went onto Ovando!

Day 8, Friday, Phillipsburg to Ovando!
Wikipedia lists the population of Ovando, as 70 in 2000.  We were told 64.  Regardless, small town.  Here is the scene as the town served us our lunch.  It was termed by many as Outrageously adorable....

It would be better called 'Dinner' as you had to sit down.  Yep.  The 3 little kids would follow you to your seat, and then pounce, handing you a tuna wrap.  But, no seat, no food.  That's called Dinner.

I'm hoping to get some pics, but our entertainment was by 3 local kids, ages 16, 15, and 14, who played key boards, banjo, mandolin, and guitar; they were heavily influenced by blue grass and folk music, but showed talent in numerous genres.  And they were impossibly adept, leading Wes, a crew member and graduate of Berklee college of music to comment that it was "incredibly unfair that they were that talented."  Kill your TV folks, just saying.

One of the kids had an original model T that he'd pulled from the mud and restored, down to hand carving the wooden spokes on the wheels.  I'll edit this when I get a picture.  I managed to get in an easy ride -- I didn't have much to give after the long ride the day before, but I felt compelled.

This picture is outside of Ovando. This is a 'selfie' of me riding some gravel road in the middle of nowhere.  Stunningly gorgeous, if a bit austere.  The cyclocross bike was definitely the one to take on this trip as it let me get to somewhat more remote locations.

Day 9, Saturday, riding from Ovando to Missoula was uneventful.
After the riders packed up and went home, the staff drove onto Spokane, and went to Northern Lights Brewing for dinner.  A small group of us went into check out downtown Spokane, and the falls.

Which brings us to one final story.  As were getting ready to cross the street, what appears to be at least 500 riders starts to ride through the traffic light.  It looked like a critical mass ride (rides held nationwide where large numbers of riders gather, and then take the streets shutting down traffic, etc), and I fully expected the riders to break the law, and continue to swarm once the light turned red.  But instead they obeyed all laws.

And this is where it got weird.

Staff member B. called out to a rider, "Hey what's going on"
Rider in Spokane, "We're the F&%#ing Bike Club"
Me, "Hey no need for that, I'm hurt"
B, "Seriously you don't even KNOW me"
(Aside: we were being quite obviously, childish, as I'm not easily offended by language, and B. is an actual fisherman).

Some blocks later, a dad and his child are politely last at the light, as the 500 riders are ahead of them, and again, I yell, "Hey, what's going on?!"

And they were.  They even have a Blog.  For language reasons I won't link to it, but you can probably find it.

All I could do is laugh. They were indeed the one and only FBC.

Made it home in time for dinner on Sunday, and fell to bed nice and early.  Stay tuned for the trip to the Wallowas next week.
Posted by Luke at 3:35 PM