UGA ultimate, Ultimate, and The Complete Saga of UGA Sports.... Sort of.

A Bunch of us used to play frisbee together.  This is that story.

Today we tell the story of OTP -- the funnest bunch of miscreants ever to cleat up.  For a couple years we'd fly from across the country to play wreck our bodies with two days of ultimate frisbee with no substitute players, and generally make fools of ourselves.  This is that story.


But like all great things, the golden day of Georgia Greatness Passed. Grant and Alex moved to New Mexico. Robbye moved to North Carolina. Rob Barrett moved to Boston. Luke moved to Seattle. Of course, these events happened over several years. And in fact, it was not until Grant returned from Santa Fe that Eric Olson even arrived on the scene. But these were nonetheless, seminal events in the saga of the Georgia Ultimate Playing community, so the lack of, well, accuracy can be chalked up to artistic license.

But to summarize, over the years, a bunch of us played cards, drank beer, and played ultimate frisbee in and about the area of Athens, GA.


Then came that fateful day in 1999. Grant called us all and told us the awful news. He was due for a partial phlebotomy. At the time, none of us were at all aware that this meant that he was going to have some blood drawn. In our anguish, and concern, that Grant was having emergency surgery to have his "phleb" removed, we hurriedly purchased plane tickets, rented cars, and hustled to get back to Athens, GA for the Savage 7 Tournament: To play Ultimate with our friend Grant for one last time. Of course we found out at that point, just what exactly a phlebotomy was, so we celebrated by having a bar be que, playing cards, and having a good time.

2000 was no different. This time Grant was developing a case of Olfactory Hirsuteness. And to make matters worse, Alex (who had, moved back to Athens) was developing an adipose problem over the long winter months. Well, we (Rob, Robbye, Andy, Eric, and Luke) almost fell for it (hey, we went to UGA, not Harvard), until Rob Barrett looked up these words in the dictionary and bailed us out (Rob is in Graduate school. He is therefore, "book-learned" -- the highest level of intelligence for a southerner). Turmoil rocked the team. Luke was waffling horrifically, making up injuries to fictional body parts (how exactly do you strain your arugula), Robbye (also in graduate school), was making up examinations, and Andy. Well now.

Andy wrote this incredibly long email describing how busy he was, how out of shape he was, how long a drive it was, etc. It was disgusting. Only my longstanding friendship with Andy precludes me from posting the entire email here. The entire team was in jeopardy. But then Eric laid down the law... he ripped Andy a new one, so to speak. Luke was so embarrassed he had to buy the ticket. Rob, and Robbye threw it together...

Which in turn led to THIS nonsense. The Trading cards.  Where are they now?

Today, after getting his grad degree from UGA, Rob is a school counselor I think... help me out. 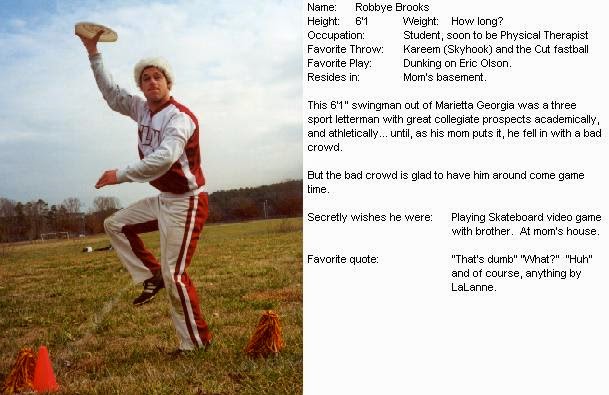 Robbye "River" is a PT in NC?  He is demonstrating the "kareem."  The throw that took America by storm during the 1990's. 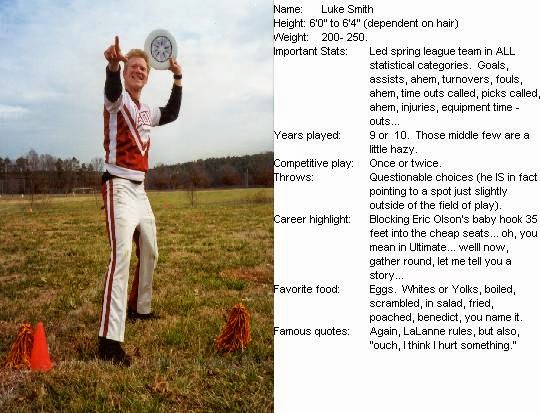 Luke taught HS for 10 years, and now is in another Master's program at UMN for Public Health (Epidemiology).  No, I don't know anything about your mole.

Grant is managing his properties and doing contracting in Athens.  He did love that upside down thumber throw. 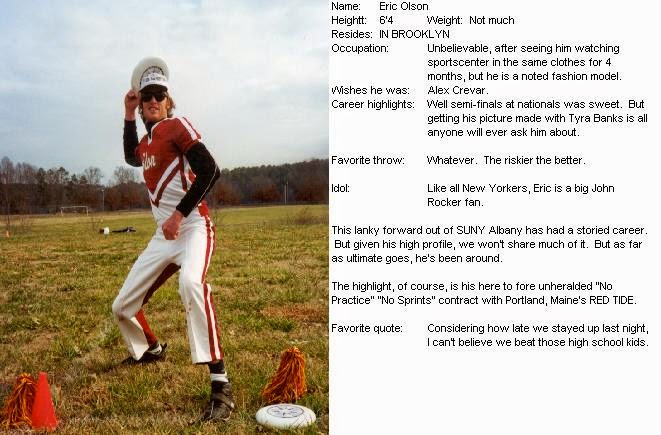 Design work of some sort EO? Need some details; living out in California. 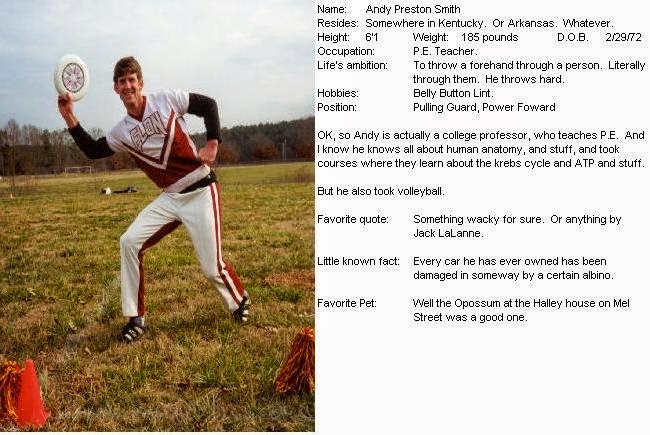 Andy was teaching last I heard.  Maybe at Kennesaw State. 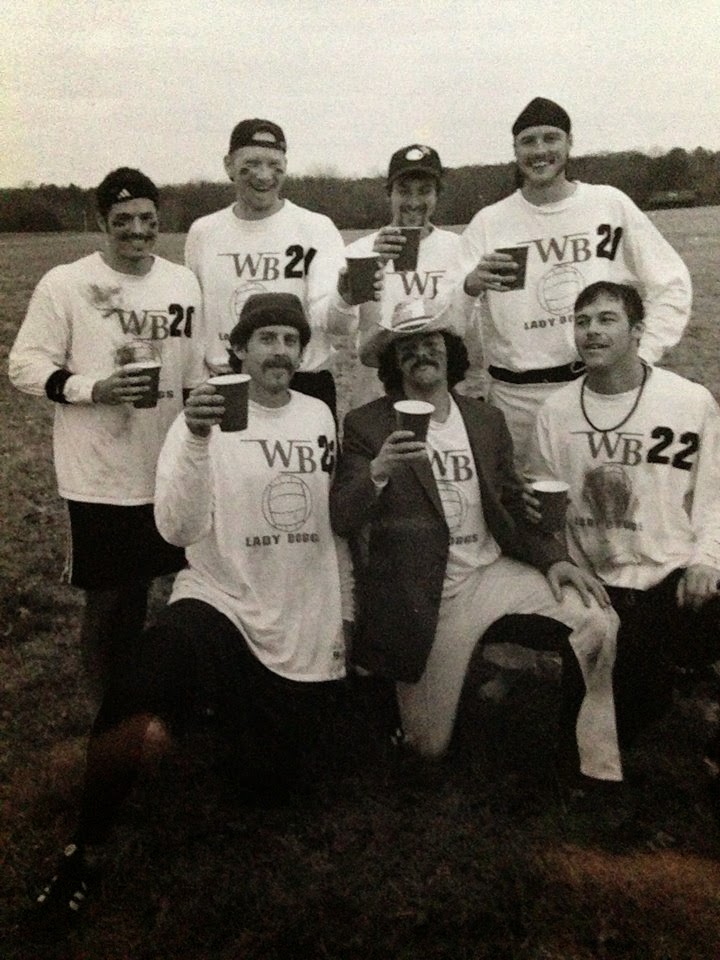 Alex Crevar was the 7th.  Today he's a journalist, perhaps you've read his work in National Geographic, and Cat Fancier.  (Nat Geo is true, not so sure about the Cat Fancier).

Alex's trading card was lost to the dustbin of time.  But there he is bottom row, having a lemonade.  Also this is the same savage 7 different year.  I'm not sure how many years we kept flying in; good times. 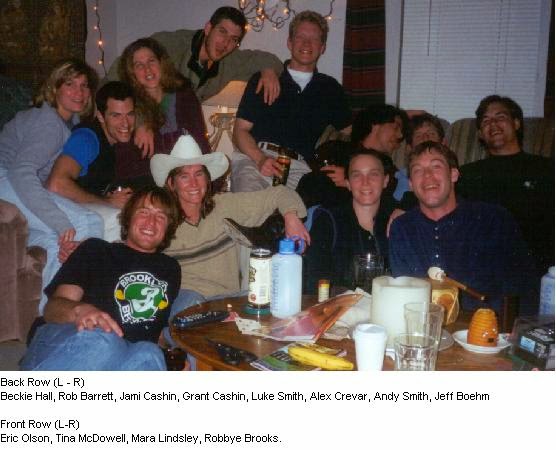 And here is a bunch more of the crew in their salad days.  Tomorrow, some poultry days.