For several years now I've been a crew hand on the baggage group for the Bicycle Rides Northwest.  This year I ascended to the lofty position of chief roustabout.  The trip covers several hundred miles of new terrain each year.  I enjoy the labor, the company, the riders, and my co-workers.  But every year I make an effort to get in some adventure.  Notably this trip.

The California Bike Ride in 2014 toured through the State of Jefferson in Northern California and Southern Oregon.  Big Foot country.  Famous also for growing lots of dope.  I did see plenty of state of Jefferson flags, but the only big feet I saw were my own, and thankfully we didn't come across any angry "farmers."  What we did come across was "hot" and lots of it.  The drives were of long duration, the roads were of marginal quality and width but the cyclists seemed to have fun.  The highlight of my trip was of course the annual, "get out the map and go get on top of the tallest thing available in the place with the fewest people."  Based on the one and only rule of adventure -- you must be doing something you'd rather be at home talking about -- the challenging ascent of Boulder Peak was a singular success. 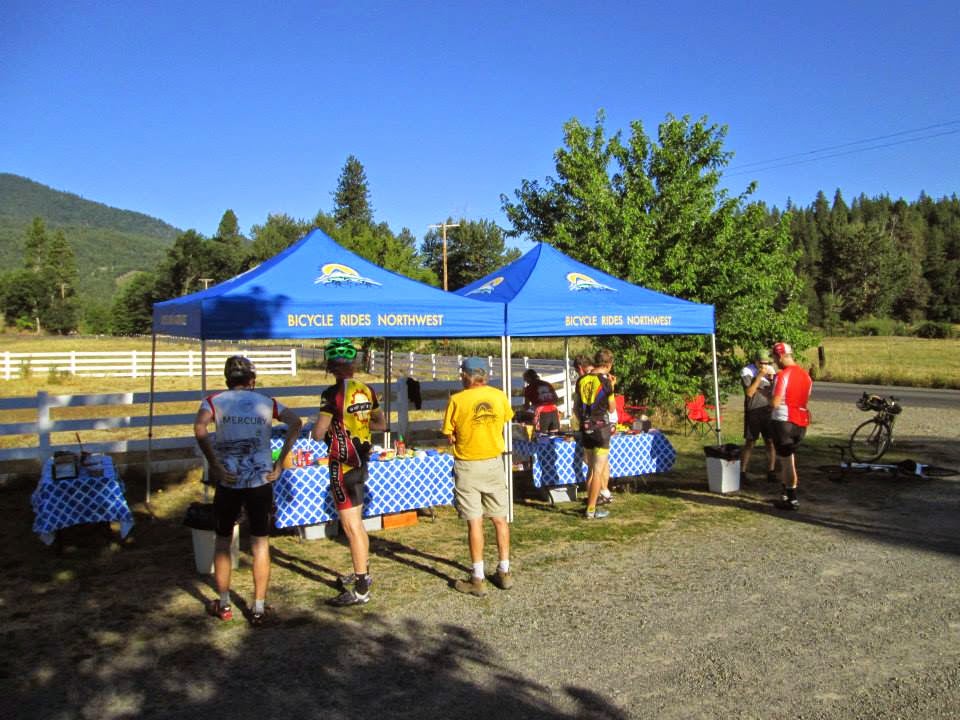 The trip was months in the making.  Once the route was published, I started scrambling for a scramble.  Thank you internet.  I settled on Boulder peak, in the Marble Mountain wilderness.  Remote, challenging and tall.  As Summitpost.com notes: 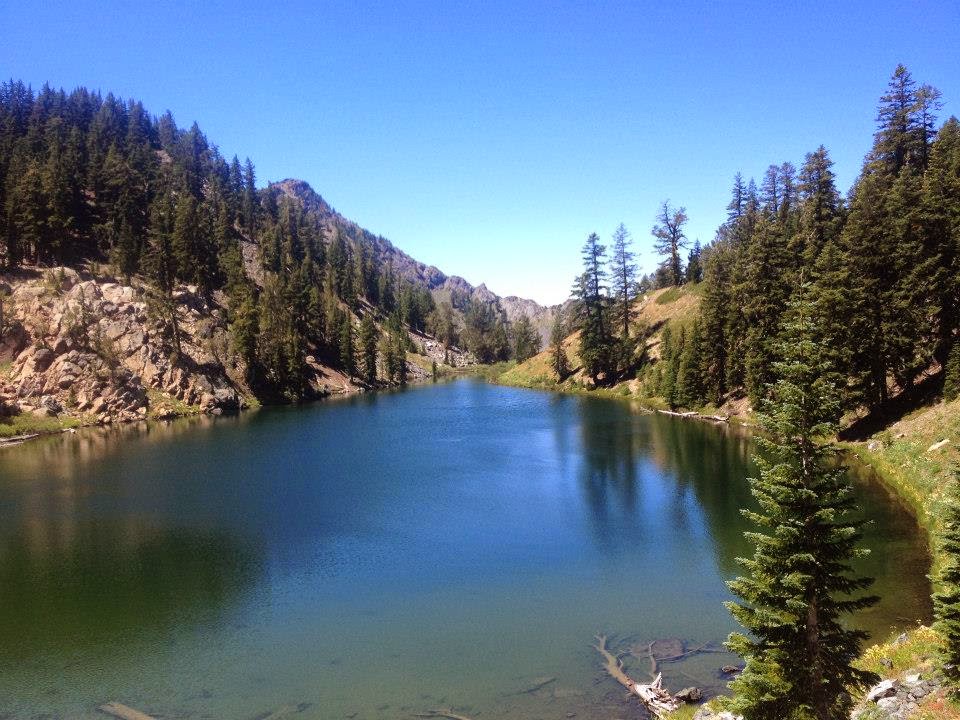 It would prove all of that. Planning for the event went completely as expected, if you know me.  I basically ignored any thought of planning, until I got to Northern California on the Bike trip, and then suddenly realized that I needed maps, water purification, etc.  But understand -- what world do you imagine you live in where you could get these things ahead of time.

The crew for the adventure was mainly the Baggage crew on this trip; and that was almost exclusively former students.  Tosch R., Brandon R., and Bryce C. had had all finished up college and were here to inject youngblood into the endeavor.  And Ryan G., another teacher who worked on the SAG (support and gear) crew would prove to be the critical piece to our adventure. 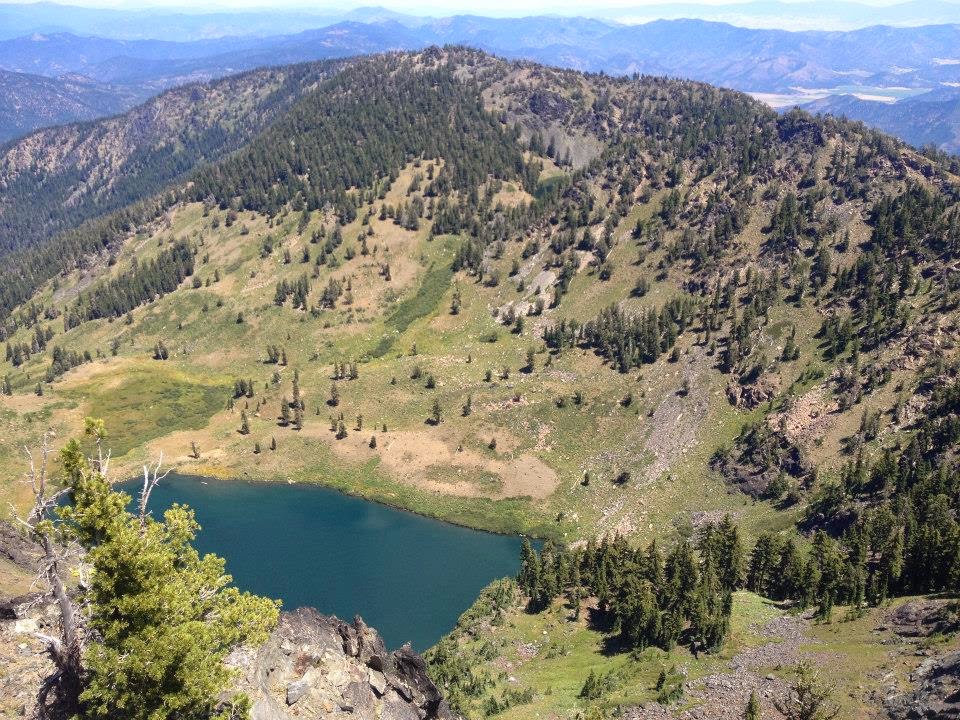 The day before the trip, baggage-hand Brandon R. and I commandeered a mini-van (politely pleaded to borrow) and roared into the nearest town (drove leisurely while listening to wait - wait -don't tell me).  It took a while, as we went to a hunting store, another hunting store, and finally, after stopping a the third hunting store, we were directed 2 blocks to the National Forest Service station by the hunting store, where we bought a map.  Never did find any Iodine pills.

Live music the night before kept the intrepid crew up but
there was no need for an alpine start as we had the day off; the trip was a layover day, and the clients would be doing a loop.  Our teamster skills were not needed.  So, the plan?  Bike 25 miles on asphalt.  Then 2.2 miles on a gravel road on our road bikes gaining about 2000 feet.  Then stash the bikes, hike 7 miles (one way) while gaining an additional 4500 feet.  Did I mention no water purification, and 100 degree heat?  Remember our motto on the Baggage team is "what's the worst that can happen" and "i don't know, your bag is probably somewhere."  JK.  We cradle bags like infants (my boss made me put that in).

Dawn broke, and we slept in.  Par for the course.  But we had a plan.  A quick cup of coffee, and ride the riders' route backwards to arrive at the rest stop just as it opened.  A variety of treats awaited us, and fortified us for the last bit of the ride.  We made good time as the fit athletes pushed the tempo, and this "athlete" said "wait up" a lot.

Ryan was the real key to the trip.  He didn't have a bike;  but he did drive to the trail head, arriving EXACTLY as we did (my logistical acumen, well, just saying)...  He had carried our running shoes/ hiking boots, backpacks... all the things that let us ride in style to the trail head, but now hike with gear.  The climb was an absolute beast.  7 miles climbing 4500 feet is legitimately STEEP.  Plus, we were startled by a large, but lethargic rattler.  Along the way we passed a couple high alpine lakes, saw some bear sign.  We also saw 3 other people.  This was disappointing.  I mean, how dare they tread in our wilderness.


Really the climb was just a ramp for 7 miles.  As you can see, the views were stellar.  The mountain has the "51st greatest prominence" in the state of California.  Basically, that just means that it's tall, and a lot taller than the things around it.  And as it's in a wilderness, the views are untrammeled? un marred?  You know.  Trees and such.  We Summited in good form (see what I did there Summit High Alums), and signed the register.  As is often the case, the stay at the top was brief.  We got a few pics, and then, were quickly chased off the 8300 foot summit by some biting black flies.  We strung out a little on the descent.  I don't "run" down mountains anymore.  It's undignified, plus, 'my ol' hips."  I did find our rattler again.  I hopped like i'd been stung and screamed out with some excitement.

At the bottom of the hike, there was a minor amount of macho posturing about biking back down 2000 feet of gravel, then biking back 25 miles.  Thankfully, Ryan had driven the van.  Tune in next year for.... THE TETONS.