Top Wackos of the world. For April 30.

Top Loons of the World.

Vladimir Putin -- Tiger blood drinker, and also, sensitive guide to lost migratory birds.  So much has been written about this man.  Arm wrestler, judo expert, the man, the myth the legend.  2 time president, intelligence officer, and bear hunter.  And if reports are to be believed, ruthless politician who  ran several false flag operations to cement power.  I'm hardly a 'truther', but the guy that brought up these accusations got poisoned with radioactive POLONIUM. 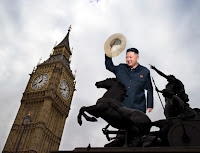 Kim Jong Un -- Building a "miniature world".  Poor Un.  Living in the shadow of his father for so many years.  Granted, at 4'little, it wasn't a large shadow, but, it was an entertaining one.  I know so much more about dear ole' dad, from his holy birth announcement of earthquakes and rainbows to his great love of movies.  All I know about Un is that he has threatened to destroy Austin, TX with all of his missile. (sic).  Houston scheduled a party to celebrate.  But building a mini world for Un-zilla to terrorize? Well it's that or feed his people.

...believe the sun revolves around the earth
...can't find America on a map
...are not sure who we declared independence from
...pee in the pool
...believe the lottery is a good investment