I'm Revisiting the past, with some frisbee content specific.  I normally have a frisbee blog, but this is quality stuff.

I went to Worlds in Scotland in 1999. My team was too bad. And that was the name. Partying ensued. I played OK, this was sort of the transitional period in my development from fairly fast Atlanta player to stupid slow Seattle player. These were the 3 years when i traveled a ton to tournaments, and developed some skills, some understanding of the game, and had a lot of fun. I was well on my to becoming a suprisingly effective slow player. I like to think i developed the same crafty moves as Jerry Rice. I think it's fairer to say that like Jerry rice in the nadir of his career, I have developed the abillity to juke all over the place with out moving anywhere. Sometimes the defense moves more than me and i miraculously get open. Combine that with the fact that i'm left handed (bordering on incompetently ambidextrous, I can actually cause turnovers with both hands), and voila. Marginal effectiveness.

Anyway, Scotland. This was maybe my favorite worlds ever. St. Andrews is beautiful, the pubs were great, I had no real pressure to win or lose. The weather was what I assume to be traditionally Scottish.  Wet, and flipping cold all the time. And basically, all 150 teams would party together every night.

After our last loss (Actually, we may have won our last game, some inconsequential seeding match), ribaldry continued. All but 4 teams (the top 2 boy and girl teams) were done, and it was shennaniriffic.

Eileen and Timmy and I were wandering around late at night/early morning, enjoying the relatively warm (50 F) evening and the questionable decision was made to get to the top of the old chapel, the tallest building in st. andrews to see the sun rise over the Firth of Forth. Well that was squashed by the walls and gates and barbed wire... so we headed back to the main campus. Looking at the old dorm where most of us were staying, I decided that the central tower of this building (like, an old castle tower) was the SECOND tallest building in St. Andrews, and that would do. 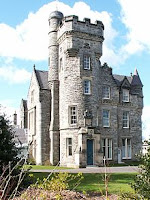 We found the closet door that contained the stairs, and up we went... in pitch black, illuminated by watch lights, we found the top door. Secured by a tiny little lock, like a luggage lock, we headed down the stairs where either EILEEN ACCIDENTALLY PUSHED OPEN a secret panel. Like pitch dark. Totally lucky. This opened on to an attic door. There was a window accross the attic, faintly revealed by the predawn light glowing behind it. I walked accross the joists, and when I arrived at the window, i noticed i was covered in cobwebs. No one had been here for years. The window was openable. I climbed out, shimmy-d around to the roof pitch, and there, 20 feet away, was the top few feet of the turret. At 6'2, I was just able to reach the low part of the parapet, and was able to chin up, and help my fellow miscreants up.

Spread out below us was all of St. Andrews, and the beautiful calm waters of the Firth (i think it means Bay or something). Slowly the sun came up. Awesome.

We descended, I jogged home, and went and watched the last matches in Torrential rain. Quidditch-erriffic.

What made the trip even better was spending another 7 days hiking and hitching around scotland, but that memory was great. Oh, for a camera...